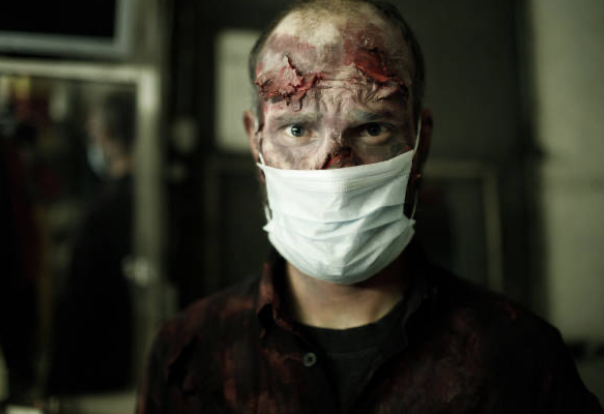 With Halloween on deck next weekend, many of us think about parties, costumes, masks, candy, trick-or-treating, and being with friends. Unfortunately, the COVID-19 pandemic is still with us, and may be putting a damper on your plans this year. One implication of living through a plague has been getting much more comfortable taking protections like social distancing and wearing masks for personal protection. So depending on how you get down for Halloween, there’s a potential two-fer in store if your costume calls for a mask – staying safe AND potential style points! This month, we want to draw your attention to a third type of “mask” that we don’t talk about as often: The mask of traditional masculinity that men and boys are taught to wear.

While norms about gender are gradually evolving in our society, there is still an archetypical understanding of what it means to be “the man.” In the academic literature, this is referred to as traditional masculinity ideology (or TMI! ;), and generally refers to when men and boys wear the mask of toughness, power, and strength. Brannon and David (1976) did some foundational cross-cultural research to determine what are the most typical underpinnings of traditional masculinity, and these authors came up with these four factors as the cardinal aspects of TMI:

1) Antifemininity – Being manly means NOT being feminine

2) Status and achievement – Being the “Big Shot”

3) Inexpressiveness and independence – Nothing knocks me off my spot

4) Adventurousness and aggressiveness- “That crazy dude”; I push for what I want.

No real surprises here, and I like to think of each of these factors of traditional masculinity as being one side of the “guy box.” Staying inside the guy box – following the “bro code” – means acting like those four traits above, mostly so as not to feel shamed or to run the risk of being perceived as weak. Each of these dimensions of masculinity reflects a “mask” that we may choose to wear for a variety of different reasons. It’s in that sense that acting out this kind of masculinity reflects a kind of mask that we’re all taught to recognize and in many ways, to respect. Now, it’s key to understand that there’s nothing inherently wrong with these aspects of masculinity and in fact there are many situations in which they’re appropriate and adaptive (e.g., we want soldiers at war to be aggressive). The issue is when men and boys try to ONLY be this kind of man that they run into trouble and tend to act out in problematic ways, shot down, drink to excess, ignore their own healthy self-care, and ultimately die an average of 5-6 years earlier than females do.

To be clear, the common understanding and expression of masculinity is under construction right now, which is a natural fit for some, but can feel very concerning for others who are more comfortable with well-defined traditional gender roles. Most of the research in this areas shows that it’s not being a man or having a masculine identity per se that is related to higher rates of depression, domestic violence, violent crime, suicide, and substance abuse – it’s the guy’s rigidity about ONLY being traditional instead of showing a more flexible version of being a man that includes also being able to show warmth, feel empathy, communicate well, and deal with conflict in a productive way. So it’s more that taking a really narrow, old school version definition of masculinity is what’s harming boys, men and society at large. Boys often hear several phrases growing up such as “man up,” “men don’t cry,” “be a man,” etc. Although these phrases may seem petty, statements like these can have a negative impact as it allows for discrimination by shaping the way masculinity is perceived. An amazing documentary called The Mask you Live in explores the definition of masculinity, explains how this definition is harming boys, men and our society, and unveils what we can do about it.

The documentary explains that boys are taught that masculinity is associated with athleticism or a skill, with economic success (e.g., power possessions), and sexual conquest. Boys are taught to behave in ways that are socially acceptable. In learning to accommodate these ideals, boys are learning to conceal or downplay qualities that are traditionally associated with femininity, meaning that boys  are less likely to show empathy or vulnerability because they’ve been socialized to do this. Boys are pressured to fit into the boxes of femininity or masculinity which encourages boys to hide all of their natural vulnerabilities and feelings behind this mask of masculinity. When boys are in pain, “they can’t reach out, because then they won’t be a real boy.” Boys are shamed into this and ashamed to break out of the box, so they live behind an emotional mask to keep them from expressing their true feelings. This traditional training of boys and men is becoming especially problematic because what society expects of them is changing toward a vision of men that is more multidimensional than just being a drill sergeant, an earner, or the Marlboro Man.

So if you really want to have a healthy Halloween scare, think about talking with a man or boy in your life about how he experiences being “the man” – and when he feels the most uncomfortable in his “mask!”